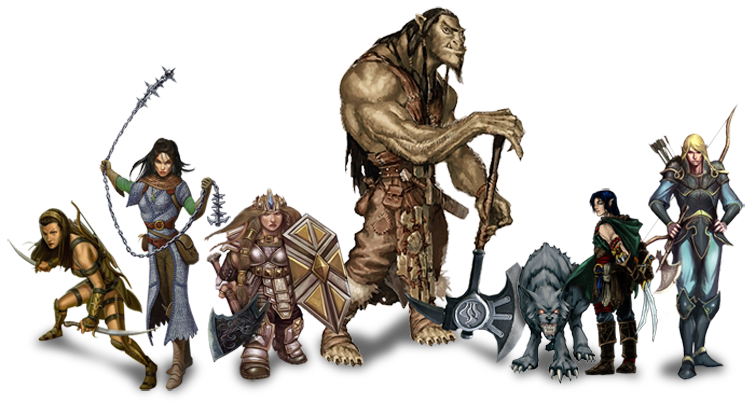 Retrieving the Crown of the True King, the Heroes of Erethor returned to the Woods of the Sahi. Kalil Al-Asham and Ahmeda Sune Ariza stood in solemn silence. Although impressed that the Heroes had retrieved the crown, dreadful news had just arrived. They have located the heir to the throne, and he is a legate of Izrador. A ritual tied to the blood mirror of Hallisport will be undertaken in two weeks’ time; and the true heir will be a participant. The crown seemed an empty trophy as the Heroes began to make what plans they could…

The Valley of Madness

Meeting with Kalil Al-Asham, the Heroes of Erethor ventured toward the Wood of the Sahi. There, they met Ahmeda Sune Ariza, a stargazer and cleric of the Sahi.

Kalil informed the Heroes about the fate of the King’s crown. It was taken by loyal warriors and hurried away from the battlefield. Using a hidden location in the Empty Wood, the Freeriders kept the Crown safe and hidden for generations. However, in the past few years, strange voices have been calling the Freeriders away – toward the Shuddering Valley. Kalil believes that within that valley of madness, the Heroes may find the Crown of the King.

Escaping the ruins of Wylar Nothas the Heroes of Erethor met Connor Al Siad once more. He introduced them to a member of his Order. This new ally led the Heroes to the Woods of Starry Hope, said to be the final tomb of the last queen of Erenland. Buried with her, the swaddling clothes of the true king. Wrapped in an artifact known as the Wings of the Griffon, the last king was stolen away, leaving his mother buried alive with the cloak as a bitter reminder of her failure as monarch and mother.

And so, the Heroes ventured toward the crag hidden deep within the woods…

From ages past, a voice beckons

For every victory, a set-back. The great triumph over the forces of Sunuleal was short-lived. Shortly after returning to Caradul, the Heroes of Erethor were given woeful news: the Whisper has fallen silent. Worse still, Queen Aradil has fallen into a state of unconsciousness.

Without the Whisper or the Queen – the woods of Erethor are like a moat without water, a fortress without walls.

The final push for the forest is surely underway. The shadow and his allies would not miss such an opportunity as this.

Desperate for new allies and new hope, Ressial has sent the Heroes of Erethor chasing a prophecy. According to the ancient tome, “Shandring’s Gambit” humanity alone holds the key to undoing the grip of Izrador! Three artifacts, laid out in the constellations, are said to exist among the mixed-people of Erenland: the Banner, the Wings, and the Crown.

With little else but a prayer to the deaf ears of the gods, the Heroes of Erethor venture out to a ruin near Wylar Nothas, seeking the Wardens of Erenland – a chivalric order devoted finding the rightful heir to the Erenalndish throne.

The Council of the Throne

With Stone Deep’s great seal broken and the angelic host saved from the demons whose origins on the continent date back to the time of Izrador’s fall from the heavens, the Heroes of Erethor are left with more questions than answers.

Lord Dashtir, their friend and ally has mentioned his concern over Aradil’s physical health. She seems ill and weak – no longer the Queen she once was. Futher fears have been stoked by word that Whisper Adepts have been kidnapped in the North. Even Suruliam fears the Whisper is no longer to be considered a trusted tool. For too long it has been toyed with by forces unknown. Add to this the mysterious disappearance of the seer, Criagth Galeck, from his hermitage in the forest. Powerful and subtle forces are at work in Erethor.

The Heroes have decided to head north, back to Caradul to meet with the Council of the Throne to help decide what their next move should be.

Fate of the Immortals

Victory! A word so foreign in the Aruun Jungle that its mere utterance is little short of a miracle.

From the bloodied lips of the Heroes comes the sacred word. They emerge, triumphant from the Violet Citadel of Ibon-Sul.

From that demon-haunted city they bring two mighty treasures: first, the key: the mysterious device that shall break the seal and unlock the way to the Greater Domain of Stone Deep. Second, the shell – a strange and enigmatic artifact from Prehistory and the Time of Years – its purpose and function still unknown to any living being.

Returning to the Hamlet of Druid’s Swamp with their prizes, the heroes are faced with a conundrum beyond any mortal’s reckoning: Do they dare rend the seal, and seek the holy creature spoken of by White Mother’s Son? Or will opening this accursed tomb serve only to free an evil so ancient and vile that the Aeltherian fore-bearers, mighty as they were, sought to lock it away forever?

These questions will haunt them for all their days as they consider the nature of their quest: What price are the Heroes willing to pay to learn the Fate of the Immortals?

Half-truths and puzzles haunt the Heroes of Erethor.

With the destruction of the Obsidian Spire, the power of Camp Blackshard has been extinguished thus ending the corruption of the Whispering Wood. The fortress of Three Oaks has been vouchsafed through the Heroes’ efforts but little time has been bought.

With the revelation that Sunulael was behind the drafting and sacrificing of Jahzir’s orcs, rumour of civil war sweeps central Eredane like a swordgrass wildfire. Yet the Heroes are in no position to take advantage.

Still in the Hamlet of Druid’s Swamp, they await news of the location of Ibon-Sul. It is the Heroes’ belief that only within that demon haunted city can any lasting hope be found. Sent thither by the spirit of an Elthedar king of Stone Deep, there is a promise of two artifacts of wondrous power. The first merely a key, but a key said to open the lower vaults of the Domhain wherein reside celestial wonders dating from the fall of Izrador. Second, in Ibon-Sul within the Daemon Citadel is a large, pearl and ivory conch; its purpose and origin unknown, even to Aradil herself!

And so, having defended the Eastern Front of Erethor from Grial Fey-Killer and Kulos the Exonerated’s armies, the Heroes prepare to venture South and West into the Aruun Jungle toward a city that the Witch Queen long ago forbade them enter.

Is betrayal the price Hope exacts of Heroes in this, the Last Age of Eredane?

Kit packed, weapons sharp, eyes clear: the Heroes brace themselves for Ibon-Sul, lifting to their parched lips the Daemon’s Heart!

This game will run approximately every two months until its completion.

For more information about the Midnight role-playing game visit:

The Hope of Erethor Comments

Thanks for the support and the note. A few things for you to note:
1) I’m using a (now)modified time line of events from the “Fury of Shadow” boxed set. The events in our game at Three Oaks changes the timeline from now on.
2) Because my gaming group has lot of games going on, the Midnight game will be somewhat more episodic. So…BIG 12 hour sessions once every few months.
3) Our upcoming game will take the heroes to the lost city of Ibon Sul! Should be intense (and potentially fatal!)
4) Let me know how the FATE Core conversion goes.
Best!

Just starting a Midnight game myself, though converted to FATE Core! Enjoying reading your old posts, and looking forward to the game starting up again in October :)

I'm sorry, but we no longer support this web browser. Please upgrade your browser or install Chrome or Firefox to enjoy the full functionality of this site.